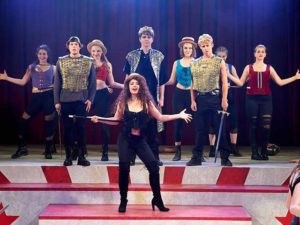 SoCal Youth Theatre was in the audience Saturday night as a sold-out house settled in to see the Palos Verdes High School Drama Department’s production of Pippin.

As the audience took their seats, we were impressed by Pippin’s extraordinary production value. Attractively designed lighting dappled the floor-level thrust stage from interesting angles, highlighting a thin layer of mist issued by a concealed fog machine. The overture began at 7:10, plunging an excited audience into the strange and wonderful world of Pippin.

Every aspect of Pippin’s opening number, “Magic to Do,” is excellent. The ensemble demonstrates a high level of coordination in their movement and vocals, belying their high school status. The exceptional efforts of director Nicole Thompson, choreographer Niko Montelibano, and vocal director Susan Secrist sparkle throughout the show, placing the quality of PV High’s Pippin far above that of the average high school production.

Immediately drawing SoCal Youth Theatre’s attention was Abby Mohaddes, who owns the stage with her dynamic portrayal of the Leading Player. Her vocals are sharp and powerful, her movements sensual, and her timing sublime. Mohaddes’ masterful interpretation of the opening number earned an enthusiastic ovation for her and her fellow players.

The plot of Pippin is unorthodox, to put it mildly. The show is initially framed as a show-within-a-show, in which a mysterious performing troupe presents the tale of Pippin, elder son of King Charlemagne. However, as the show progresses, any semblance of a fourth wall is discarded and plotlines collide, blurring the barriers between fantasy and the reality presented onstage. Another high school cast might have struggled with Pippin’s complexity, but PV High’s talented and versatile actors make it work beautifully.

In the titular role, Joey Bacon skillfully embodies the angst of an idealistic young man in search of greater meaning. Over the course of the show, Pippin bounces from one avocation to the next, never finding a direction he feels is worthwhile. As the eldest son of King Charlemagne (Michael Ticknor), Pippin is next in line for the throne, but his mother Fastrada (Kailee Kakazu) has other ideas: she wishes to ensure that Pippin’s imbecilic younger brother Lewis (Tanner Hickson) ascends to the throne instead.

As Charlemagne, Michael Ticknor takes the opportunity to flex his comic muscles, eliciting hearty laughter from the audience for a series of clever bits shared with his onstage family. At one point, Ticknor is called upon to lead a challenging uptempo rendition of “War is a Science,” which he also performs with finesse.

Fastrada and Charlemagne’s dimwitted younger son Lewis is portrayed by Tanner Hickson, who hilariously relishes his goofy character, much to the delight of his audience.

The first act of Pippin features a series of powerful ensemble numbers, including “War is a Science,” in which Charlemagne and his army prepare to go to war with the newly-enlisted Pippin in tow, and “Glory,” in which Pippin’s first battle commences. In the latter, Montelibano’s choreography, as performed by Mohaddes, Nicole Rogalski, and Brooke Vanderdonck, is particularly stunning.

Upon surviving the battle, Pippin decides that the army isn’t for him. Desperate for a sympathetic ear, he seeks counsel from his acerbic grandmother Berthe (Hallie Kostrencich). As Berthe, Kostrencich exudes personality and confidence; her brilliant rendition of “No Time at All” even featured sections where the audience was encouraged to sing along with her.

Eventually, Pippin’s travels bring him to a country estate, where he meets the widowed Catherine (Brooke Vanderdonck) and her anatidaephilic son Theo. As Pippin and Catherine begin to fall in love, the Leading Player methodically disassembles the last vestiges of the fourth wall, setting the stage for the strangely stirring Finale.

In the role of Catherine, Vanderdonck shows off her lovely voice and character acting ability in her melancholic ballad, “I Guess I’ll Miss the Man,” among other touching songs. A PV High regular, Vanderdonck was most recently seen by SoCal Youth Theatre as Sally in You’re a Good Man, Charlie Brown.

Catherine’s son Theo is portrayed by Julian Wain, a fifth grader hailing from Silver Spur Elementary, who more than holds his own in the role.

Under the direction of Shellie Parkinson, Pippin’s nine-piece orchestra provides uptempo accompaniment of exceptional quality. Bearing special mention in the technical realm are Matt Scarpino, Steve Giltner, and Ilana Elroi, who managed scenics, lighting, and sound, respectively. These production values were also far above average for a high school production, and contributed greatly to the show’s overall impact.

Pippin is a highly unusual show, performed by a highly unusual troupe. Its clever book and score are handled expertly by Pippin’s fantastic creative team and cast, making for one of the best youth theatre productions SoCal Youth Theatre has ever seen.

SoCal Youth Theatre believes this production should be considered PG-13 for mild language, risqué choreography and direction, a book replete with innuendos, and a stylized sex scene between Pippin and Catherine in the second act.