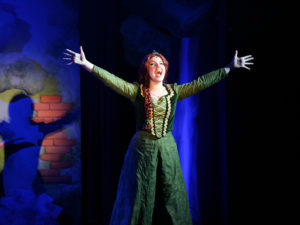 While Palos Verdes High School shows are always great fun, the cast and crew have outdone themselves with their ebullient production of “Shrek,” which continues this weekend.

The students’ energy bursts like gas bubbles out of swamp water, and it’s clear everyone — from the student orchestra led by student conductor Zack DiLello to the freak-filled ensemble — is having the kind of fun found only in fairy tales. Backstage, a capable crew handles multiple sound cues and lightning-quick changes in scenes, costumes and makeup to bring the otherworldly kingdom of Duloc to life.

“It was the biggest production I’ve ever been part of,” PVHS Drama Director Nicole Thompson said. “This was the biggest crew we’ve ever had, because of the amount of hair and makeup and costumes, but it came together.”

The story is the well-known tale of unsuitable boy meets unattainable girl. But what a boy, and what a girl! Max Havas bursts into the title role with a voice as forceful as his character, who’s unhappy to find his isolated swamp has been overrun with fairy-tale “freaks” evicted from Duloc.

Havas, a junior who recently won second place in the National American Teachers for Singing competition, spends nearly two hours before each show putting on the prosthetics and makeup needed to play the tough ogre with the tender heart.

“This performance took a lot of work, because it’s such a huge show, and also the physical element of having the prosthetics on and being able to sing and act,” Havas said. “But it’s really a rewarding experience. It definitely adds a whole new level to the character, and I’m so happy I get to do it.” Shrek picks up a new friend in Donkey (played by Grant Unno) on his way to Duloc, where he meets its ruler, Farquaad, played by an expressive Terran Mueller, who walks, prances and dances on his knees.