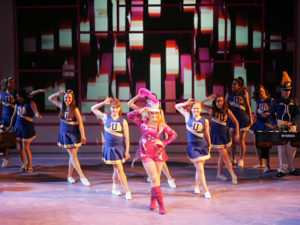 Palos Verdes High School’s spring show, “Legally Blonde: The Musical,” was sold out its first weekend, and it’s easy to see why. From its opening number, “Omigod You Guys” to the finale, “Find My Way,” the musical’s peppy energy never stops. As we follow Elle, we learn life is like school — there’s a time to be frivolous, a time to be serious and always time to find your path.

The singing, stylin’ sorority sisters of Delta Nu spring into a colorful swirl of girlish energy barely contained, a world of ponytails and eyeshadow, cell phones and BFFs. From the frothy pink of exuberant sisterhood Elle emerges, the epitome of blonde beauty poised to make her entrance into adulthood. This is the night she’ll finally wear an engagement ring, and the Delta Nu sorority is there to cheer her on.

Kyra Johnson’s smooth, clear voice and expressive face give her portrayal of Elle a palpable determination, self-assurance and freshness. Having played the title roles in “Annie” and “Thoroughly Modern Millie” at the Norris Theatre, Johnson seems the go-to girl for conjuring defiant young women fighting for their dreams.

Reality hits Elle hard when Warner (played by Cole Graham) tells her that in his quest to get serious, he’ll have to let her go. Sadly for him — and fortunately for her — Warner underestimates Elle. In an action that’s a taste of things to come, she takes a decisive step, pursuing him all the way to Harvard Law School.

We endure culture shock and the scene moves from the neon world of Delta Nu to the somber hue and mood of Harvard, where academic and professional competition is cutthroat. Just as the path to Warner seems clear for Elle, her biggest obstacle looms: Vivienne Kensington (Valerie Skerkavich), his girlfriend. And she’s not cutting Elle any slack.